We got a new oven a few weeks ago which is awesome, as it now takes a reasonable amount of time to cook something. No more six hour chickens or three hour bagels. I don’t even care that my roasting pan and one of my cookie sheets don’t fit in it.

Even though it’s about 32ºC today, I thought I’d test it with some cookies. 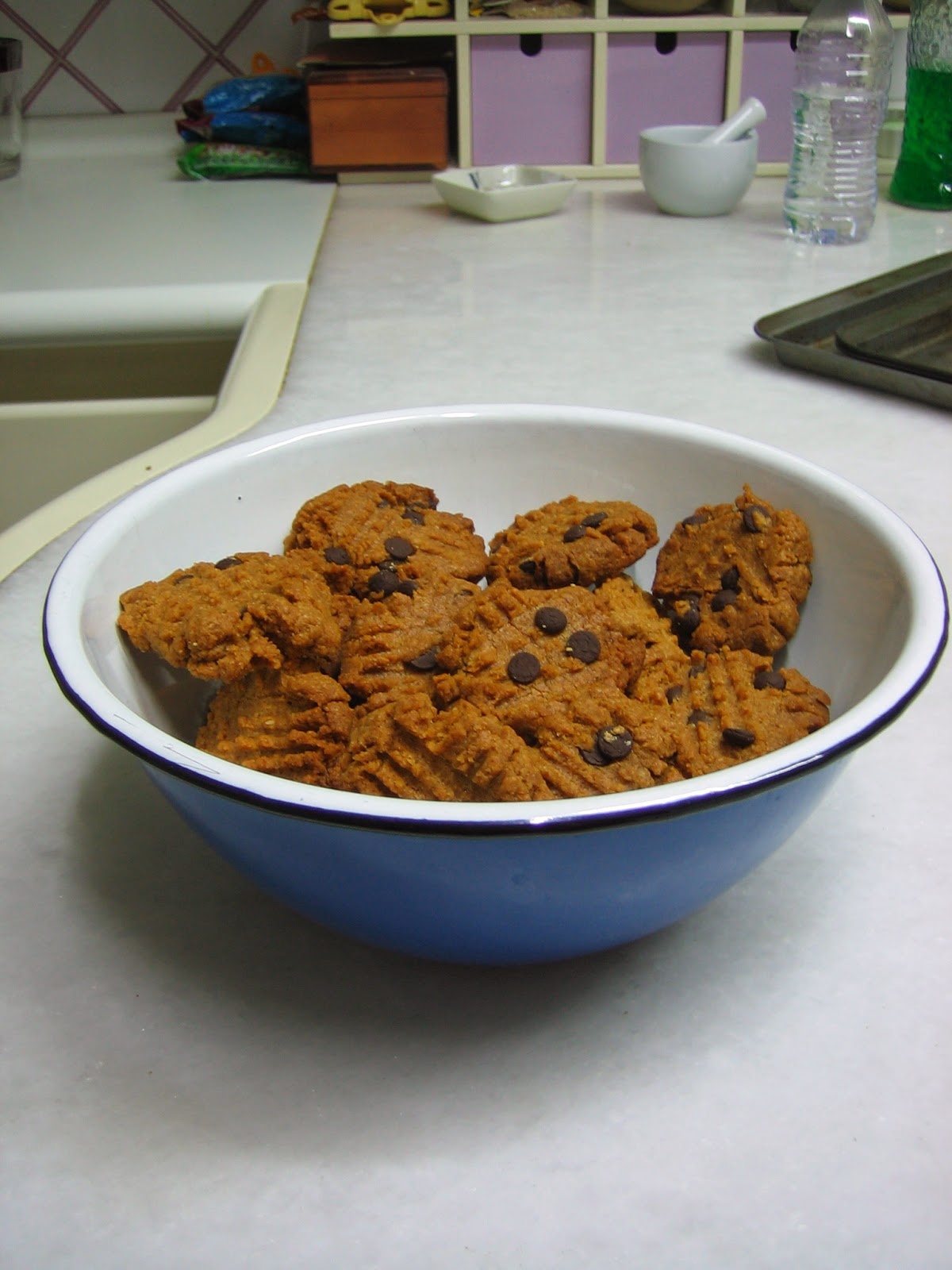 There are tons of flourless peanut butter cookie recipes all over the innerwebs, so I just kind of looked at several, saw what I had and mixed everything up.

1 c peanut butter
1 c sugar (some recipes use white, some use dark; I had some Chinese brown sugar, which isn’t really as squishy as it is in the US, but I used it anyway, and mixed it with white sugar)
1 tsp baking soda (bicarbinatodi sodio, if you happen to be looking for it in Italy)
1 tsp vanilla
1 egg
mini dark chocolate chips

Preheat oven to 175ºC/350ºF.
Line a couple of cookie sheets with parchment paper.

Mix all the ingredients except the chocolate chips together in a bowl. Most recipes say to cream them until light and fluffy and some tell you to mix the peanut butter with the sugar and, I think, the egg before adding the baking soda and vanilla, but I don’t have a mixer and I wasn’t really reading anyone’s directions, so I used a wooden spoon and bashed it all around until it seemed pretty homogenous and I couldn’t really feel the sugar granules anymore.

Pinch off pieces of dough and roll into balls, about 1’ diameter and place on a cookie sheet lined with parchment. This is especially useful if, like me, you don’t know that one of your cookie sheets won’t fit in your oven, as it’s super easy to just lift the sides of the parchment laden with cookie blobs off of the sheet and place it on another, smaller cookie sheet

If you want, use a fork to press them down. You don’t have to make the criss-cross pattern that signifies Peanut Butter Cookies—the cookies’ll kind of puff up and some of them won’t retain the crosshatch anyway—but I like to. At this point, I sprinkle the chocolate chips on top and sort of smoosh them into the dough since it’s pretty crumbly and doesn’t hold the chocolate chips well if you fold them in. You end up with most of the chocolate chips loose in the bottom of the bowl and have to smoosh ‘em in, anyway. My way annoys me less.

Take them out and let them cool on the cookie sheet for a few minutes. Delight in the fact that the whole process took only a half an hour instead of the hour and a half it would’ve taken with my old oven.
Posted by nancy at 7:03 PM 0 comments

Email ThisBlogThis!Share to TwitterShare to FacebookShare to Pinterest
Labels: food

One of the things I find myself having to deal with here so much more than I ever did in NY is using up food before it spoils. In part because of the lack of preservatives or maybe the lack of a good seal on our ancient refrigerator but mostly because in NY, I didn’t cook, unless you count the occasional pot of rice and beans and I don’t, not really. After getting home between 7p and 9p most nights, if I wanted to eat anything more than a few handfuls of Cheez-Itz, we’d either order in or walk up the block to get burgers or burritos. Here, though, I cook all the time and since it’s usually not Italian food, whenever I find an ingredient that’s either hard to find or generally expensive, chances are I’m going to have to use it all week or else have to throw it away.

Last night, we had a chicken we needed to cook and a bowl full of sad looking jalapeños and habañeros that were starting to wrinkle. We had already made burritos (twice. had to use the tortillas we found at Lidl on the cheap once we’d opened the package) and spicy guacamole (had to use those avocados before they got all brown and fiber-y) and were in the mood for something….other. I was thinking Indian. I would just substitute jalapeños and habañeros for green Indian chilies.

But I didn’t want to make yet another chicken curry. I checked the internet to find something else.

There was this recipe for oven fried chili chicken. But I didn’t have any eggs. So I found a substitute: milk mixed with flour. It worked ok for double breading the chicken, but it didn’t help the batter stick that well. Noted.

Now, what to make with the chicken? I knew we had some spinach left in the fridge and it was wilting. We could make a spinach chickpea curry. But who wants a curry with fried chicken?

There was this pakora.

I substituted regular chickpea flour for besan, shallots for red onion, crushed chickpeas for potatoes, garam masala for chaat masala, fennel seeds for carom seeds. And it was good.

Now to find a way to include “cooking various and sundry cuisines using non-traditional ingredients because I couldn’t find them easily in Italy” to my résumé as a means of accounting for the past four years. Last week, we took the train to Ancona. It’s a port city about an hour and a half from here.

I think maybe because it’s a port city, it has a lot of immigrants and because of that, there are an abundance of markets—asian, African, eastern European—that cater to them. It was lovely to be somewhere I could find ingredients and treats unavailable here, but the main draw was a “kiosk” selling raw and cooked fish. Really, that’s why we went. Even though we’re near enough to San Benedetto, a beach town on the Adriatic, all of the restaurants there seem to offer the same stuff—fried fish, spaghetti and clams…..e basta.

We got off the train and meandered toward the city center, stopping to buy habanero and jalapeno peppers, chinese red bean cakes and a bamboo spatula/spoon thing for the wok.

Then, we headed up the pedestrian shopping street and across through the daily street market to Chiosco da Morena in Corso Giuseppe Mazzini.

It’s basically a hut, nestled between an ice cream shop/pizzeria and the fountain of the “tredici canelle” with a couple of high bar tables with chairs. On the other side of the street are a bunch of tables and chairs, sheltered from the sun by canopies. 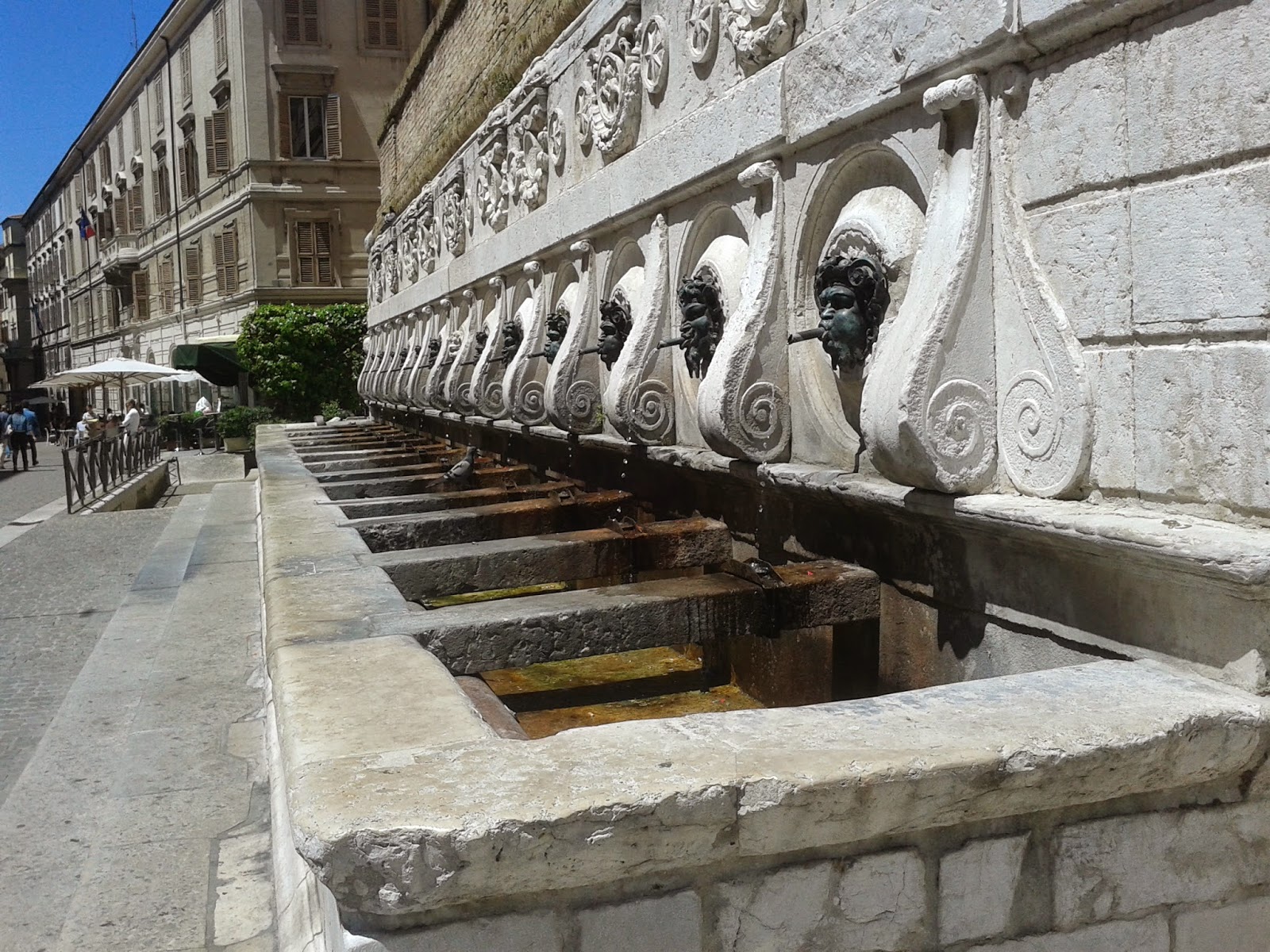 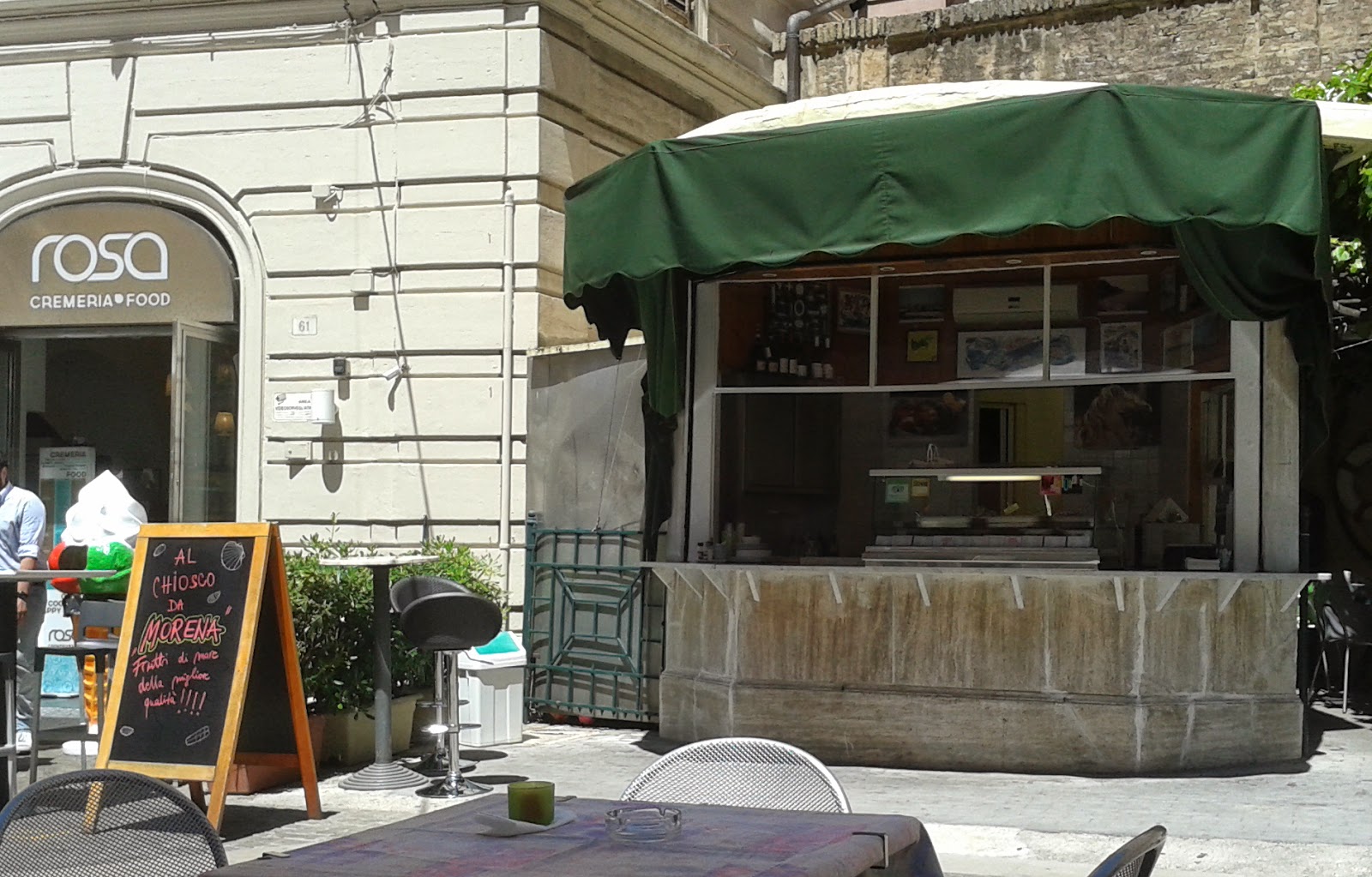 The day we were there, she had some cooked stuff, like giant shrimp and “snails of the sea” (seashells, basically) in three different sizes, shrimp cocktail served in scallop shells and baccalà. We were there for the “unusual” by Italian standards, so we ordered a couple of hundred grams of the small and medium lumache and some raw oysters and what we thought were biggish clams, the size of cherrystones. 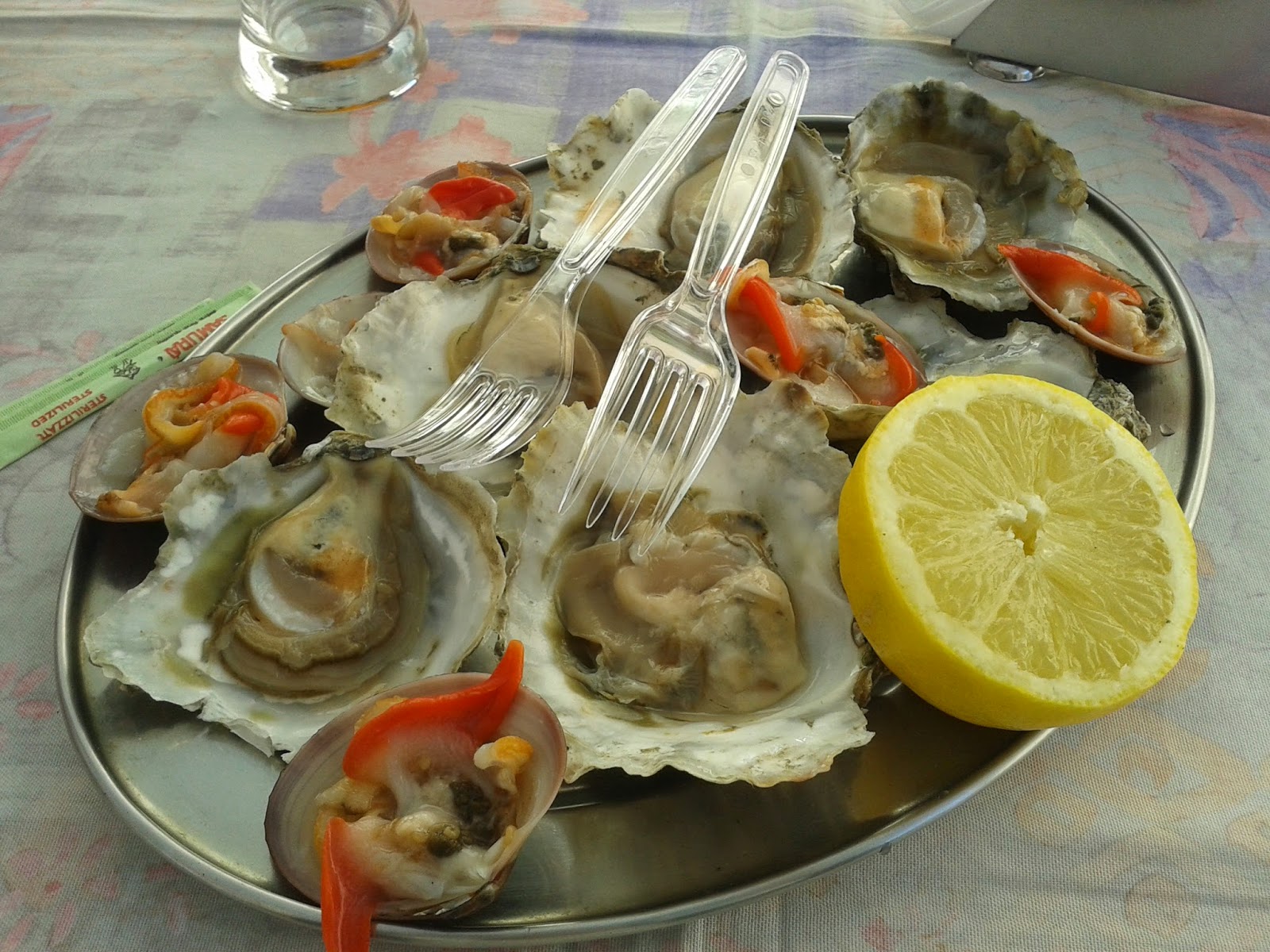 To eat the small sea snails, you jam a toothpick in the hole, pierce the meat and twist it out. The medium ones have had their tips chopped off, so for those you cover the tip with a finger and suck on the opening, then cover the opening with your thumb and suck the meat out of the tip.

The oysters were French and so good, but unfortunately on the expensive side at €2 each and the “clams” that turned out to be cockles (fasolari) which I guess are some type of clams (what do I know about bivalves, really?) for €.50 each.

We were too late for the indoor market, so after lunch we headed back to the train station by way of the port, stopping in at the Lazzaretto. I think at times it was used as a barracks and also to quarantine immigrants but now it houses a museum where you can actually touch the artwork. 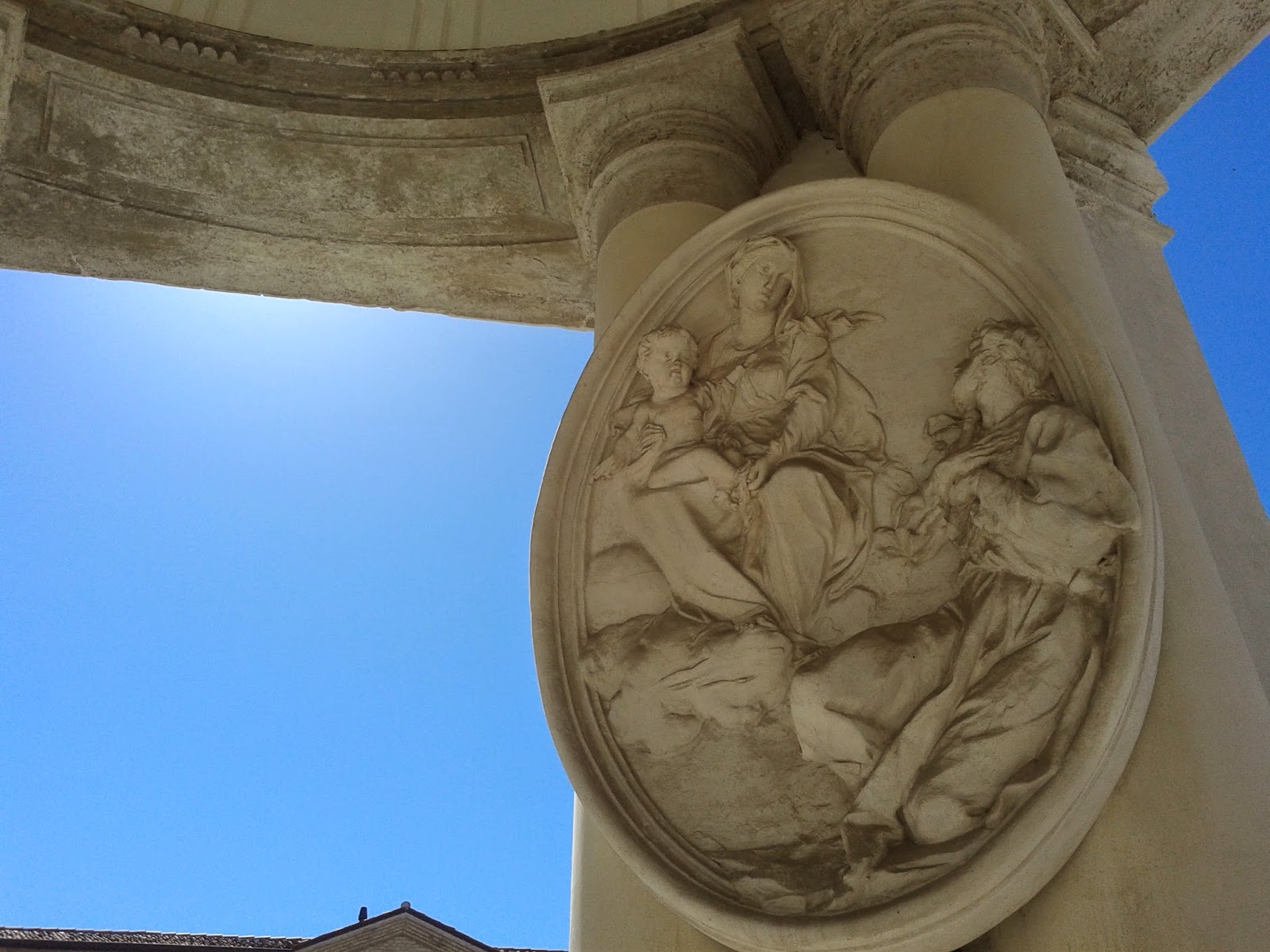 We stopped in the Mix Market, full of eastern European delicacies where I got a Russian ice cream cone and then got on the train. 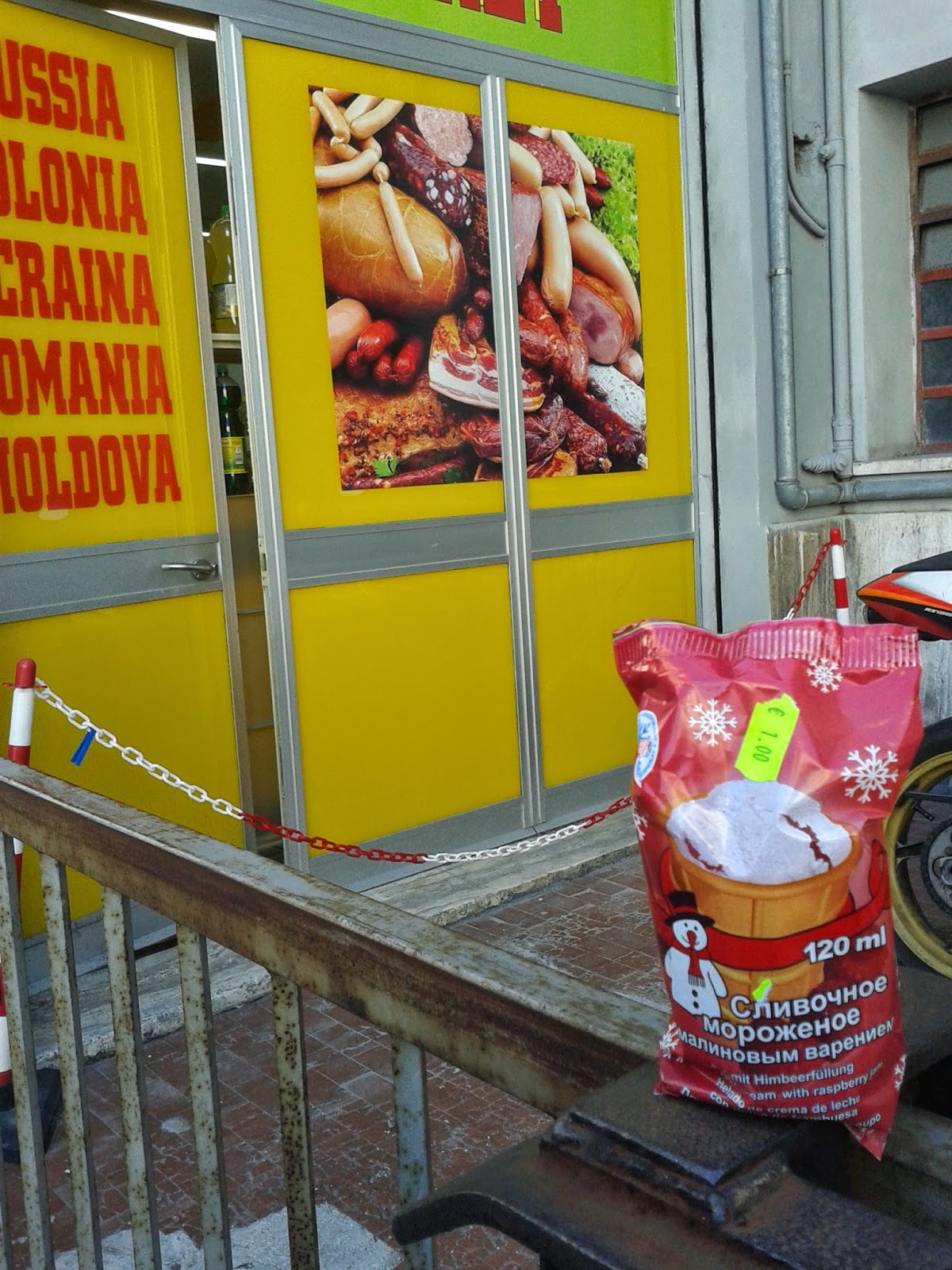 Last Wednesday, I went to the Questura to get an Italian passport.

In the US, when I last renewed my US passport, I’m pretty sure I got some photos, filled out an application, either wrote a check or provided credit card info, mailed everything to New York or Albany with my old passport and waited to receive my new one. Ten minutes to put everything together, maybe, plus the wait for delivery. In Italy, it went like this:

I arrived at the Questura around 10am and took a look around the room to note all the folks who were ahead of me. Once they’d all been helped, I’d know it was my turn.

“Y’know, “ I said to V. “They should really have the applications and the information sheet with what you need out here on the shelf so people don’t have to wait on line.”

“Why? So it could be more convenient for people?”

“And if they just took credit cards, this would take no time at all.”

V. rolled his eyes, weary of my refusal to just accept things in Italy as they are. “They don’t care how long it takes you.”

Thirty minutes later, I walked up to the window,

The man leaned over, his stick-straight brown hair swinging forward from behind  his ears, and he said something very quickly which I didn’t understand. I stared back blankly, distracted by his dress shirt unbuttoned part way down his chest.

He handed me a square of paper that detailed everything I’d need:

“And the application?”
“When you return, “ the man with the hair responded.

We walked down to the post office. It’s a large one, larger than the one in our town, so instead of the usual “chi è l’ultimo?” they have a number system. A machine dispenses these numbers, based on what type of service you need. I located the button for “versamenti” and waited for my letter/number combination to appear on the overhead screen, worrying that I’d not make it back to the Questura before it closed at 1pm.

Forty-five minutes later, my number appeared and I paid my €42.50  plus  €1.30 in “tax” or service fee, got my receipt and headed over to the tabaccaio. Now, the name “tobacconist” is a bit incomplete. Sure, they sell cigarettes, but they also sell lottery tickets, newspapers, magazines, candy, small gifts, the ever important tax stamps and will also send a fax and make a photocopies for you.

At the tabaccaio, I got my “marco di concessione” and a photocopy of my carta d’identita and headed back over to the questura.

The line was much shorter and after five minutes I handed over my marco di concessione, my proof of payment receipt from the post office, the copy of my carta d’identita and the sheet of photos I’d gotten last week from a photo booth at the mall.

The man behind the window handed me the form and I filled out the usual “name, address, birth date, birth place” info required on every single form everywhere in Italy while he entered my info on his computer.

He took electronic imprints of each of my index fingers and told me to come back in three weeks to pick up my passport, handing me a piece of paper to show him when I return.

It only took a little over two hours.
Posted by nancy at 4:03 PM 0 comments

nancy
Four years ago, I quit a well-paying, high-stress job in NYC for a non-paying, low-stress life in Italy. I've learned so much here. Like, not to put mustard on mortadella. Or garlic AND onions don't go in the sauce. I spend a lot of time missing Cheez-Itz and searching for roast beef at deli counters. I still haven't really learned to speak Italian, but sometimes I do it in my sleep.